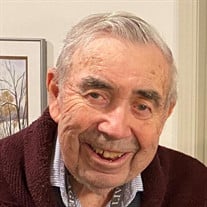 Dr. Loren John Hoffbeck, most recently of Alpharetta, GA, passed away peacefully on April 15th, 2022, at the age of 89. John was born in Ortonville, MN, on August 26th, 1932, to Roy and Myrtle (Chaussee) Hoffbeck. Over his last few weeks, he was surrounded by a rotating cast of family members who held his hand, exchanged stories, and read poems to him. The fourth of seven children, John grew up on a farm in Big Stone City, SD. It was here that he developed an early interest in plants and agriculture. During his high school years along with his brother Bill, John secured a loan from his grandfather to buy a tractor. John and Bill used the tractor to farm some of their grandfather’s land and used the earnings to pay their college tuition. John graduated from South Dakota State University, where he was a member of ROTC. After graduation, he joined the Army and trained to be a helicopter pilot. He served in the skies of Korea for over a year. After the war, John attended graduate school at the University of Wisconsin, studying agronomy and plant breeding. It was here that he nurtured his lifelong passion for plant genetics, as well as where he met his future wife, Helen. They married in 1960. After graduating with his PhD, John and Helen moved to Greeneville, TN, where John began his plant breeding career with the USDA and the newlyweds started their family. Three kids and four years later, John joined Pioneer Hi-Bred and the family moved to Tipton, IN, where they would settle for the next five decades and add two more children to the family. It was here that John’s childhood interest in crops and plants blossomed into an impressive career as a plant breeder, developing new corn inbreds and hybrids. John spent the next 37 years rising through the ranks at DuPont Pioneer, from a Corn Breeder to a Research Fellow. In this time, he amassed over 50 patents for hybrid and inbred corn. Recognized as one of the most successful corn breeders in Pioneer’s history, an award was named in his honor: the John Hoffbeck Million Unit Club Award. John “retired” in 2003, though he never stopped experimenting. He was still working on his mung bean experiments in 2020 when Helen and John moved to Alpharetta, GA. His accomplishments in corn breeding earned him the prestigious Lavoisier Medal for Lifetime Technical Achievement in 2003, DuPont’s highest science award. In his fifty-plus years living in Tipton, John became involved in the community. He was an active member of the Tipton chapter of the Kiwanis Club, helping to plant and nurture dozens of trees in Tipton City Park. He could be seen biking all over Tipton County, a passion he continued until he was 84 years old. He was a member of St. John the Baptist Church in Tipton, where five of his children and grandchildren were baptized, four of his children were married, and Helen played the organ at mass. He played bridge competitively in Kokomo and enjoyed endless Sudoku puzzles in his rocking chair. John had a quick wit unmatched by most others. You could tell when he was joking when he flashed you a conspiratorial smile that would light up the whole room. Even throughout his last few weeks, John was cracking jokes to make family and hospital staff laugh. John will be deeply missed by his surviving family members including his wife, Helen (Shea) Hoffbeck; his children, Joan (Tom) Dubnicka of Arlington Heights, IL, Mark (Sharon) Hoffbeck of Macomb, IL, Joe (Larina) Hoffbeck of Portland, OR, Amy (Brad) Reynolds of Roswell, GA, and Susan (Joe) Takacs of Naples, FL; his thirteen grandchildren, Emily Dubnicka, Michael (Ashley) Hoffbeck, Laura Dubnicka, Maureen (Cale) Heitmeier, Annie Dubnicka, Carmen Hoffbeck, Nathan Hoffbeck, Katie Reynolds, Mallory Hoffbeck, George Takacs, Megan Reynolds, Charlie Reynolds, and Henry Takacs; siblings, Bill Hoffbeck of Palatine, IL, Bob Hoffbeck of Minot, ND, and Barbara Hoffbeck Scoblic of New York City, NY; three step-great-grandchildren; many nieces and nephews; and numerous friends. He is preceded in passing by his parents, Roy and Myrtle (Chaussee) Hoffbeck of Big Stone City, SD; and sisters, Dorothy Philomene Hoffbeck of Big Stone City, SD, Patricia Ann Johnson of Naples, FL, and Helen Lucille Allen of South Haven, MN. A funeral mass will be celebrated at St. Thomas Aquinas Catholic Church in Alpharetta, Georgia on Monday, July 11, 2022 at 10:00 a.m. immediately followed by internment at Georgia National Cemetery in Canton, Georgia. In lieu of flowers, donations may be made in John’s name to the Alzheimer’s Association or to the building fund at St. John the Baptist Church in Tipton, IN.

Dr. Loren John Hoffbeck, most recently of Alpharetta, GA, passed away peacefully on April 15th, 2022, at the age of 89. John was born in Ortonville, MN, on August 26th, 1932, to Roy and Myrtle (Chaussee) Hoffbeck. Over his last few weeks, he... View Obituary & Service Information

The family of Dr. Loren John Hoffbeck created this Life Tributes page to make it easy to share your memories.

Send flowers to the Hoffbeck family.