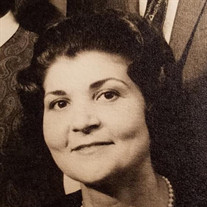 Madeline Rose Oliveri, 95, of Roswell, Georgia passed away on Thursday, September 10, 2020 in her daughter’s home surrounded by family. Madeline Rose Ippolito was born in Brooklyn, New York to Attilio and Carmela on December 2, 1924. Madeline was an exceptional student and completed her secondary school education early and left for Colby College at the age of 16; unfortunately, due to a thyroid condition she fell ill and returned to New York to complete her studies at Hunter College. Madeline took pride reliving her time in the Oak Room at the Plaza Hotel when she worked for E. F. Hutton & Company—she was one of the only women allowed in the room at the time. From there, she went on to become the first and youngest woman to be a registered representative on the floor of the New York Stock Exchange. She met her husband, John Oliveri, towards the end of WWII and they were wed on January 4, 1947. In 1951, they welcomed their first daughter, Constance, and in 1955, their second daughter Lydia. In 1955, Madeline left the New York Stock Exchange and she and John moved out to Long Island, settling in Commack, New York. There they started a weekly newspaper called the Ronkonkoma Review with Madeline as the editor and John as the publisher. They later expanded their business to include other weekly newspapers for neighboring towns as well as Shoppers. Madeline was recognized by Who’s Who of American Women in their 14th Edition in 1985/1986. Upon retirement, they settled in Palm Harbor, Florida where Madeline volunteered at the Palm Harbor Library, wrote the community newspaper for Highland Lakes, announced the Synchronized Swimmers, dove into ceramics, enjoyed chocolate and cookie making, and found herself on the stage again, broadcast in television commercials, and even on the MTV Movie Awards with Samuel L. Jackson and John Travolta. She spent her spare time with her seven grandchildren and traveled the world with John. She was recognized by the Palm Harbor Library as Volunteer of the Year, served on their board, and was an integral part of the development of the young library organization. Madeline and John were married sixty-five years when he passed. At that time, she sold her home in Palm Harbor and made her way to live with her daughter, Connie, and her husband, Rich, in Roswell, Georgia. Madeline carried out the remainder of her days surrounded by her great-grandchildren, Madeline, John, Mia, and Gianna, while filling the in-between days with crossword puzzles, playing solitaire, endless nights of dominoes, and playing cards. Anyone who knew her will agree that she was accomplished, elegant, strong, stoic, confident, poised, well-spoken, inviting, loving, and profound; the impact she made on their lives was a lasting one. She is survived by her daughters and sons-in-law, Constance and Richard Wendlek and Lydia and Paul Fichtman; her grandchildren, David Wendlek, Daniel Wendlek, Christina McKean, Kurt Fichtman, Melissa Hofmann, Kyle Fichtman, and Allyson Carolan; her great-grandchildren, Mia Rose and Gianna Olivia Wendlek, Madeline Rose and John Joseph McKean, Ellie Grace and Abbie Faith Fichtman, Elizabeth Marie, Sophia Grace, and Christopher James Hofmann, Ava Elizabeth, Henry Jackson, and Olivia Anne Fichtman, Hunter John, Joey Daniel, and Lily Blythe Carolan. Following a Catholic mass, she will be laid to rest with her husband in Arlington National Cemetery. In lieu of flowers, the family is asking that donations be made to the Palm Harbor Library 2330 Nebraska Ave, Palm Harbor, FL 34683 attn: Gene Coppola in honor of Madeline Oliveri. A writer’s program is being developed in her honor.

The family of Mrs. Madeline Rose Oliveri created this Life Tributes page to make it easy to share your memories.

Madeline Rose Oliveri, 95, of Roswell, Georgia passed away on...

Send flowers to the Oliveri family.