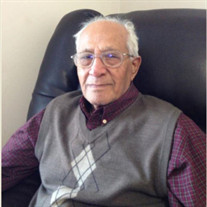 On August 5, 2020, our beloved Papaji Manishanker B. Trivedi, son of Kadviben and Bhanji Becharji, started his eternal journey to heavenly abode. Born in 1923 in a small village Harsurpur, he came from a very modest background. He lost his father at an early age. During his early childhood, he and his older brother, Labhshanker B. Trivedi, helped their mother to take care and feed their family. He was a self-made man in the truest definition. He was the first in his extended family to graduate from college. He and his brother put themselves through college by working and earning various scholarships. He earned Bachelor of Electrical and Mechanical Engineering with distinction from Mumbai’s prestigious VJTI Technology Institute. As an Electrical Engineer, he played a crucial role in electrification of urban and rural post-independence India. He married his wife Bhanuben and had five great children - Pratima, Mamta, Uma, Vipul and Kanan. He played a great role in rearing all of his children. He nurtured his children with the utmost care and taught them the importance of education, discipline and self-dependence. He lost his wife at a very early age. He then migrated to the United States so that his children can have a better future. He did various jobs to help his children migrate to the United States. Even after settling his children in the United State, he continued to play important role in their professional and personal lives. His passion for music, baseball and the Western movies was unparalleled. He enjoyed songs of K L Saigal, Pankaj Malik and many other singers. His passion made others around him follow music, baseball and Western movies. He was a great symbol of strength, positivity, compassion and self-reliance. He was loved and admired by family, friends and strangers. He is survived by his children - Pratima, Mamta, Uma, Vipul, Kanan and their respective families.

On August 5, 2020, our beloved Papaji Manishanker B. Trivedi, son of Kadviben and Bhanji Becharji, started his eternal journey to heavenly abode. Born in 1923 in a small village Harsurpur, he came from a very modest background. He lost his... View Obituary & Service Information

The family of Mr. Manishanker Trivedi created this Life Tributes page to make it easy to share your memories.

Send flowers to the Trivedi family.