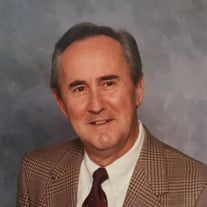 Rev. Mr. Martin James Lampe, 91, of Atlanta GA, entered into eternal rest on February 13, 2021. He was born on September 8, 1929 in Baltimore, MD to Catherine Murphy Lampe and Martin Luther Lampe. They called him ‘Bubs’ as a baby and, to his dismay, it stuck. When he was seven, Martin and his family moved to Atlanta, where he attended St. Anthony’s Elementary and Marist Military High School. From altar boy to cheerleader and officer, he was well educated in the Catholic faith. After high school, he attended Georgia Tech, served in the Naval Reserve as a medical corpsman, and worked as a radio disc jockey. His radio show was called Martin’s Menagerie, which was fitting as he later helped raise his own menagerie of sorts with our family. He met the love of his life Ann Frances Poole, and they married in 1950 at Sacred Heart Church in Atlanta. Together they had eight children. The family moved around the Southeast following his career in sales and eventually landed back in Atlanta, where he worked for Mosler Safe Company until he retired at age 70. Martin and Ann’s Catholic faith and devotion to the church formed the foundation of their lives. Martin was ordained as a deacon on May 23rd, 1987. He served at Our Lady of the Assumption and St. Catherine of Siena Catholic Churches before he and Ann became founding members of St. Peter Chanel Catholic Church. After 25 fulfilling and blessed years in the diaconate, he retired in 2012 to care for his wife. Martin could talk to anyone – he never met a stranger. He loved to put a smile on everyone’s face with a joke or a good story, and he was an even better listener. He enjoyed crooning to Frank Sinatra, painting, fishing, and spending time with his family. He was a beloved husband, father, and PopPop. He was preceded in death by his wife Ann, parents Catherine and Martin, sister Kathryn Herber, and brother Joseph. He is survived by his sister Eileen Taylor, his children Barbara Olis (Steve), Susan Davis, Karen Gourlay (Bob), Martin James (Jim) Lampe, Jr. (Sabrina), Marilyn Shea (Jeff), John Lampe, Joan Johnson (Clay), Beth Belden (Doug), 18 grandchildren, and 17 great-grandchildren. The family would like to thank the caregivers at The Georgian Lakeside who helped to make his final years so full of joy. A funeral Mass will be held for immediate family on Thursday, February 18th at 2 PM. For those who would like to join, the livestream of the service can be viewed here: https://tinyurl.com/4jj8ln27. In lieu of flowers, donations may be made to St. Peter Chanel Catholic Church.

The family of Rev. Mr. Martin J. Lampe created this Life Tributes page to make it easy to share your memories.

Send flowers to the Lampe family.