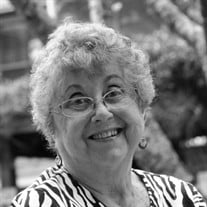 Mary Adams was a loving and caring wife, mother, grandmother, great grandmother, sister and friend who left us on June 19, 2021 at age 89. She was born to Marie and Ted Gross in Chicago, Illinois, where she grew up with her three siblings Ted, Marguerite, and Loretta. Her high school senior class prophecy read “still bike-riding, has been feted as the only cyclist who has toured the whole of North America…” Her St. Gregory senior picture highlighted her as a “fashionable miss with a keen sense of humor with consistent courtesy”. While she did not become a cyclist, she did have a whirlwind tour. After graduating nursing school from Saint Francis Hospital School of Nursing, she decided to leave Chicago with eight other nursing friends to live in Hollywood, California. They lived in a two bedroom, eight bed apartment (none of them had jobs yet), where she worked as a nurse. She later moved back to Chicago to live with her family and continued working as a nurse. A few years later, she decided to join the military to see the world, and picked the Air Force because they had the best uniforms! Soon afterwards, she was stationed in San Antonio, Texas. It was there that she met Challie Adams, and Mary fell in love and got married. Mary worked as a nurse on the surgical team at the Lackland Air Force Base Hospital performing some of the first open heart and heart by-pass surgeries. After the birth of their son, David, in Texas, the family moved back to Chicago for 12 years. The family grew with the births of daughters Joni and Lisa. She continued to work as a nurse. Mary was known for hosting great parties at the house for family, friends, and neighbors. The family then moved to Tucker, Georgia, in 1973, where Mary continued her nursing career. She was a nurse at Egleston, Kennestone, and Piedmont hospitals. She was a great mentor to David and Joni, encouraging both to study at Georgia Tech and become engineers. She later influenced Lisa to take on nursing as a new career, something that bonds them forever. She eventually retired in the 1990s, but continued to inspire all around her. Mary loved to travel and take cruises, and had a special fondness for going to the beach. She loved family and took great pride in it. Mary is survived by her children David (Andrea), Joni Roberts (David), Lisa Puckett (Reid); eight grandchildren (Michelle, Jonathan, Christopher, Kelly, Adam, Marie, Carter, and Sam); and five great grandchildren (Vivian, Ryan, Clara, Cassidy, and Thomas James). She will be missed, but never forgotten. In lieu of flowers, the family requests a donation to the Daisy Foundation (www.daisyfoundation.org/donate) , an organization that recognizes and honors extraordinary nurses. A “Celebration of Life” gathering to remember Mary will be planned in late Summer-early Fall of 2021 with family and friends. Both Mary and Challie will have interment with full military honors at the Georgia National Cemetery in Canton, Georgia in the Fall of 2021.

Mary Adams was a loving and caring wife, mother, grandmother, great grandmother, sister and friend who left us on June 19, 2021 at age 89. She was born to Marie and Ted Gross in Chicago, Illinois, where she grew up with her three siblings Ted,... View Obituary & Service Information

The family of Mary Adams created this Life Tributes page to make it easy to share your memories.

Mary Adams was a loving and caring wife, mother, grandmother,...

Send flowers to the Adams family.