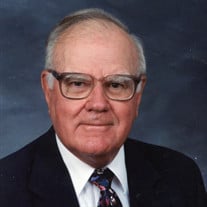 Maurice (Ray) Raymond Turcotte died very peacefully at his home at Saint George Village in Roswell, GA. He was born in Willimantic, CT, on May 23, 1925, to Anne Justine (McManus) and Samuel Joseph Turcotte, M.D. Being born on the cusp of the Greatest Generation and the Silent Generation, he was raised during the Depression and learned well the values of both frugality and great generosity, which he demonstrated all his life. At a young age he and his mother moved to Lincoln, RI, to live with his mother’s sister Alice and her husband Edward Burns. He would remain in this tight family unit for the remainder of his formative years. Life during the Depression was lean, but his uncle always had a job. Ray saw work as an opportunity rather than a burden and worked on a bread delivery truck in late grade school through high school. He was admitted to St. Raphael Academy in Pawtucket after presenting himself at the front door and asking the brothers if he could go to school there. After high school he attended Providence College for one year before dropping out and getting a job in the local textile mill. He often said that the mill experience, where workers rarely had ten fingers and often had difficulty breathing, was a prime motivator for the rest of his academic career. He returned to Providence College and graduated with a Biology degree in 1946. During this time, he also played semi-pro football. This was the era of leather helmets and the sideways snap. He weighed a mere 125lbs but he had sure hands, so he played center, although he earned the nickname “Tanglefoot Turcotte”. Promising PC science students often attended Thomas Jefferson Medical School in Philadelphia and Ray followed this path, graduating in 1950. Upon completing his residencies in Maryland and Connecticut, he briefly opened an office in General Practice. He was fond of pointing out that he charged $2 for an office visit and $3 for a home visit, including any drugs and injections. He enjoyed the GP role, but his true love was anesthesiology, so he returned to Hartford, Connecticut and completed his two-year residency at St Francis Hospital and the US Army, where he was stationed in Germany. He practiced anesthesia at St. Francis until 1967 and then relocated to South Fulton Hospital in Atlanta, GA. In 1977, he served as President of the Georgia Society of Anesthesiologists. After a brief attempt at retirement he volunteered at the Atlanta VA Medical Center and shortly thereafter was promoted to Assistant Professor at Emory University School of Medicine. He is fondly remembered by many Emory graduates from their time spent in the anesthesia rotation at the VA. Ray was kind soul, with a quick smile, sparkling eyes and a warm “How are ya, sweetheart?” in his thick Rhode Island accent. As a high schooler during WWII, he and other teens manned the volunteer fire department. As an adult, he joined a team of Emory Hospital specialists volunteering with Doctors Without Borders on trips to the surgical hospital in Milot, Haiti. He loved trout fishing with his boys. He was a lifelong PC Friars basketball fan. He loved the poetry of e.e.cummings. When deployed overseas, he took a single medical textbook and a poetry anthology. He loved the beach at Narragansett. He led a life of giving and was known for his bedside manner. In private practice, he would clear his books at Christmas by sending a paid-in-full notice and a card to patients with outstanding bills. And he would be embarrassed by the mention of any of the above. Ray is predeceased by his first wife and mother of his nine children, Joan Helene (Torak), his second wife Cecilia Rosana (Blance), his brother Legrand Samuel, his son Joseph Samuel M.D., his son Stephen George, and his great-granddaughter Jennifer. He is survived by his children Maurice (Jeannette), Anne, John (Sandra), Suzanne (Fred Colson), Mary (Monty) Brown, Margaret (Brad) Bartlett, and Catherine (John) Amarante, 27 grandchildren and 23 great-grandchildren. These times dictate that the funeral mass will be private, as will his interment at the Georgia National Cemetery. Memorial contributions may be made to Providence College, Doctors Without Borders, or the Saint George Village Care Partner Appreciation Fund, whose staff he held in highest regard.

Maurice (Ray) Raymond Turcotte died very peacefully at his home at Saint George Village in Roswell, GA. He was born in Willimantic, CT, on May 23, 1925, to Anne Justine (McManus) and Samuel Joseph Turcotte, M.D. Being born on the cusp of the... View Obituary & Service Information

The family of Dr. Maurice R. Turcotte created this Life Tributes page to make it easy to share your memories.

Send flowers to the Turcotte family.