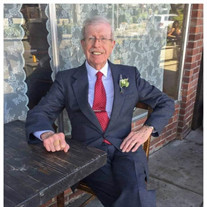 Professor Michael W. M. Jenkins died peacefully in hospice in Marietta, Georgia on June 13th 2020, at the age of 88. He is survived by his wife, Thelma May -- who was at his bedside when he passed -- his son, Mark Andrew, and daughter, Sharon Ann, and many nieces and nephews. He is preceded in death by his parents, Arthur William Jenkins and Elsie Leonora Jenkins (nee Edney), and all eight of his siblings. Michael was born on September 30th, 1931 in Gloucester, England. From an early age Michael was fascinated with airplanes. His early memories of the Battle of Britain, fought in the skies above his homeland, forever shaped his dreams. Even in his later years, seeing a Spitfire in flight still evoked powerful emotions. In 1948, he started an apprenticeship at Gloster Aircraft Company learning the craft and art of building airplanes in the factory. In 1956, he married his sweetheart, Thelma May Hopkins and in 1961 the couple welcomed their first child, Mark. In 1963, the family moved to the US and then made their way south to Georgia. In 1966, Michael began working at Lockheed’s Marietta facility, finishing in the Aeronautics Advanced Design Department. In 1970, the family welcomed a daughter, Sharon, into their lives. Pursuing his passion for aeronautics and education was a life dream for Michael. In 1988, he began teaching aerospace design at Georgia Tech where he was voted Most Valuable Professor by his students many years running. There is a Senior Aerospace Design trophy named in his honor, which is given to the top aeronautical engineering students. Michael had many other awards and accolades. He became a Fellow of Royal Aeronautical Society and the Institute of Mechanical Engineers as well as an Associate Fellow of the American Institute of Aeronautics & Astronautics. He pioneered three patents related to stability and control in airplanes. Michael was a playful spirit who always looked for a way to make others smile. He loved sharp witticisms, bad puns, and physical humor and his laughter was infectious. The other way he expressed joy was through art. His cartoons, sketches, watercolor and oil paintings provide enduring memories of his talent. Despite all the achievements and awards, he is best remembered for being a loving husband and father. One who wanted the very best for his family. A funeral has not yet been scheduled because of the pandemic, but it was Michael’s wish to have his ashes returned to the Cotswolds of his youth in England. The family would like to thank the caregivers at Heritage Hospice in Marietta for their compassionate care and support during Michael’s final days. Condolences may be posted to Northside Chapel website (www.northsidechapel.com). If you wish to donate to a charitable cause in Michael’s honor please consider the Wounded Warrior Project (www.woundedwarriorproject.org) and Heritage Hospice in Marietta (heritage-hospice.com).

Professor Michael W. M. Jenkins died peacefully in hospice in Marietta, Georgia on June 13th 2020, at the age of 88. He is survived by his wife, Thelma May -- who was at his bedside when he passed -- his son, Mark Andrew, and daughter, Sharon... View Obituary & Service Information

The family of Professor Michael Jenkins created this Life Tributes page to make it easy to share your memories.

Send flowers to the Jenkins family.