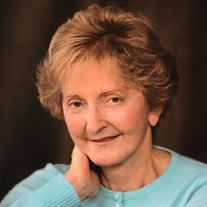 Patsy Ann Poovey, age 84, passed away on November 7, 2020 in Roswell, GA. Born in Canton, NC, her parents were Ernest and Jincy Messer. Pat graduated from Canton High School in Canton, NC. She attended Mary Baldwin College and the University of North Carolina where she graduated with a Bachelor of Arts degree. Pat met Clyde Poovey while he was working in Canton, NC and they were married in 1959. Pat and Clyde were together for 57 years before his passing in 2016. Pat and Clyde were longtime active members of Perimeter Church in Johns Creek, GA where they were involved in mentoring premarital couples toward a Godly, happy, healthy marriage. They were also members of a gourmet cooking group for many years and enjoyed being a part of the Perimeter ballroom dance community. Pat and Clyde traveled extensively through Clyde’s leadership role in the Prestressed Concrete Institute and through the Georgia Tech alumni association. Their adventures included heli-hiking and cave tubing. They also enjoyed off the beaten path travel taking their teenage sons to places like the ruins of Tikal in Guatemala and Machu Pichu in Peru. Pat and Clyde were supporters of organizations and causes which they believed in including Perimeter Church, the Camp All-American Scholarship Fund outreach and children’s ministry at Perimeter Church, Cherokee Christian School and the Christian Film and Television Commission. They also supported their two granddaughters at Cherokee Christian School and later Fellowship Christian School. Pat volunteered at Ivy Hall assisted living in Johns Creek, GA and North Fulton Community Charities in Roswell, GA. When Pat went to live in assisted living herself, she was active in Community Bible Study in Roswell, GA where members would drive her back and forth from the meetings. Pat is survived by her two sons, Phillip and Brant. Phillip and his wife Lauren have two daughters, Kendall and Rachel. The memorial service will take place November 12 at 2:00 p.m. at Perimeter Church, 9500 Medlock Bridge Rd., Johns Creek, GA, 30097. Pat will be buried in the Georgia National Cemetery in Canton, GA, with her husband Clyde at 9:00 a.m. on November 16. In lieu of flowers, please make donations to North Fulton Community Charities, 11270 Elkins Road, Roswell, GA, 30076.

The family of Mrs. Patsy Ann Poovey created this Life Tributes page to make it easy to share your memories.

Send flowers to the Poovey family.