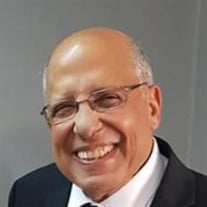 Ralph F. Malek, 76, passed away on Sunday, October 25, 2020 due to complications from Covid-19. He was, first and foremost, a servant of Jesus Christ, and a beloved member of St. Paul’s Coptic Orthodox Church. Ralph was a husband of 49 years to Nashwa (Sedhom) Malek, father to Mark R. Malek and Andrew R. Malek (deceased 1994), and grandfather to Andrew M. Malek and Jacob M. Malek. Ralph was born in Suhag, Egypt on November 8, 1943. He immigrated to the United States in 1969. He returned to Egypt in 1971 to marry Nashwa. They started their life together in upstate NY where Ralph worked initially as a chemist for Reichheld Chemicals. While he was working as a chemist, he completed his PhD at NYU. In 1990, Ralph moved his family to North Carolina when his company relocated their headquarters. In 1992, Ralph and Nashwa moved with their youngest son, Andrew, to New Jersey as Ralph took a job with Rhone Poulenc, which was later acquired by Rhodia, which was later acquired by Solvay. In 1994, Ralph and Nashwa’s son, Andrew, was tragically killed in a vehicle accident by a drunk driver. Although this was the darkest time in their lives, they persevered, grew closer to one another, grew closer to their church and strengthened their faith. They moved to the Atlanta area in 1998 and established themselves in the community. Over the years, Ralph has been known as a mentor to many, a father figure to several, a trusted advisor, and a friend to all who knew him. His home was always open to anyone, and he would always make himself available to anyone that needed assistance. Ralph loved his work and did not retire until the age of 71. He also loved to travel. During the early years, Ralph loved taking his family to many national parks throughout the United States. Ralph and Nashwa were naturalized as US Citizens in 1976, and Ralph was very proud of being an American. He loved the United States and had a unique perspective of the opportunities that are available in the United States. This explained Ralph’s love of history and the enjoyment he took from studying the American Presidents. Most of all, however, Ralph loved to serve. Ralph lived a lifestyle of being a servant leader not only in his Church, but in his professional life and his community as well. Ralph will be missed by many and his absence will leave a void in so many lives. But those that know him best, know that today he is rejoicing in the arms of the Father and is reunited with his son. A funeral service will be held on Friday, October 30, 2020 at 11:30 AM at St. Mary’s Coptic Orthodox Church in Roswell, GA. In lieu of flowers, the family asks that donations be made to St. Paul’s Coptic Orthodox Church https://www.stpaulatlanta.org/.

Ralph F. Malek, 76, passed away on Sunday, October 25, 2020 due to complications from Covid-19. He was, first and foremost, a servant of Jesus Christ, and a beloved member of St. Paul&#8217;s Coptic Orthodox Church. Ralph was a husband of... View Obituary & Service Information

The family of Mr. Ralph Fares Malek created this Life Tributes page to make it easy to share your memories.

Send flowers to the Malek family.