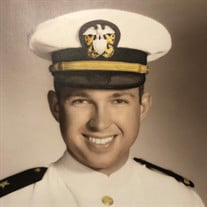 Glower Rhodes Waller Jr., 82, of Roswell, GA, peacefully passed on January 21st, 2022, surrounded by loving family in his own home. A native Atlantan, Rhodes was born on February 7th, 1939, to Sara Shelton Waller and Glower Rhodes Waller, Sr. He was always proud of his father's service as a Marine Corps veteran, who fought with the Fifth Marine Division at the Battle of Iwo Jima. Rhodes grew up in East Point, and had fond memories of the family farm in Fayetteville. He was proud to have attended the Marist School, and graduated from Russell High School in 1957. He worked his way through college, and graduated with a Bachelor of Science in Industrial Management from The Georgia Institute of Technology in 1962. Upon graduation from Georgia Tech, he attended U.S. Naval Officer Candidate School at U.S. Naval Base Newport, Rhode Island, and commissioned an Ensign on December 21st, 1962. Ensign Waller attended Naval Officers Communications School, and was subsequently assigned to the USS BOXER (LPH-4). He received commendation in June 1963 for actions during the Haitian Contingency, and was promoted to Lieutenant Junior Grade on June 20th, 1964. Despite being prone to seasickness, he would spend twenty eight months on sea service before leaving active duty in December 1965. He was appointed to the rank of Lieutenant on July 1st, 1967, and was honorably discharged from the Naval Reserve in June 1973. He enjoyed a highly successful industrial sales career with Allegheny Ludlum Steel Corporation. He coordinated with the Atomic Energy Commission, Nuclear Division at Oak Ridge, Tennessee--requiring "Q" clearance of utmost national importance. Following 46 dedicated years and being selected as the salesman of the year on several occasions, Rhodes received a bronzed driving shoe upon retirement. Rhodes was a man of great integrity, who was known for his gregarious and fun loving personality, and sometimes--an off beat sense of humor. He was a celebrity amongst those who knew him, and you knew when he was around by his booming baritone voice. Having never met a stranger before, he was referred to as Handsome Rhodes--most often times by himself. He was an avid supporter of Georgia Tech athletics, member of the Georgia Tech Alumni Association and Georgia Tech lunch bunch. He was also a member of Northbrook United Methodist Church, the Atlanta Touchdown Club, and Ansley Golf Club. He is predeceased in death by his parents Sara Shelton Waller and Glower Rhodes Waller, Sr., and his daughter Elizabeth Hanshew (Bryan). He is survived by his wife of almost 45 years, Heath G. Waller. He is also survived by his sister Sally Gladden (Steve) of Chapin, SC; brother Thomas Waller (Sara Anne) of Fayetteville, GA; his daughters Heath Eckerd (Bill) of St. Simons Island, GA, Rebecca Rogers (Michael) of Williamsburg, VA, Sara Rippel (John) of Madison, MS, and Mary Barnes Monte (Alexander) of Kailua HI; and his son Brandon of Williamsburg, VA. He is also survived by Thirteen grandchildren: Xena Brown and Annabelle Hanshew; Jake and Brooks Braswell; Gabriel, Matthew, Elijah, and Zeke Rogers; Jackson Rhodes, Ansley and Alice Heath Rippel; and Charleston and Rhodes Monte. Memorial service will be held on Saturday, January 29th, at 2:00 PM, at Northbrook United Methodist located at 11225 Crabapple Road, Roswell, GA. Reception to follow immediately after memorial service at Settindown Golf Club located at 1608 Settindown Drive, Roswell, GA. Internment of remains with full military honors will take place on Monday, January 31st, at 9:00 AM at Georgia National Cemetery. A block of rooms has been reserved for out of town guests at Embassy Suites by Hilton Alpharetta, phone 678-566-8800. In lieu of flowers, the family requests donations be made to Northbrook United Methodist Church or to the Salvation Army.

The family of Mr. Rhodes Waller created this Life Tributes page to make it easy to share your memories.

Send flowers to the Waller family.