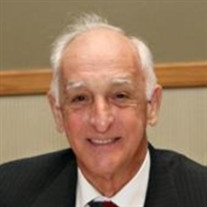 Richard J. “Dick” Curtis 87, passed away on Thursday, July 16, 2020 in Roswell, GA. Born on September 20, 1932 in Lebanon, NH, he was the son of the late Fred and Rose (Allard) Curtis. Dick grew up in Lebanon and graduated from Lebanon High School in 1950. He married Dolores (Zullo) Curtis of Claremont, NH, in December of 1953, his beloved wife of 65 years. Dick worked for Allstate Insurance Company in Brattleboro, VT for 35 years and got to know many Brattleboro area residents. He and Dolly spent most of their married life raising their family in Brattleboro before retiring to Spring Hill, FL in 1996, then later to Roswell GA. Dick joined the US Navy (1951-1955), and worked as a radar technician, stationed in Norfolk, VA. He was very proud of his service during the Korean war aboard the Battleship USS New Jersey (BB-62). He often reminisced about his adventures and his time in Japan. Dick was a long-time member of the Brattleboro Elks BPOE #1499. He was an avid Boston Red Sox fan and had to have the Red Sox cable channel on his television wherever he lived. He was the best popcorn maker ever. Every Friday night was popcorn night with his family. In the past year since his wife passed, Dick enjoyed Poker Night and spending time with his buddies at his retirement home, Vickery Rose, in Roswell, GA before moving to a care facility in February. In addition to his wife and parents, Dick was predeceased by two brothers, Donald and Fred, one sister Marie, and son-in-law Mike Elliott. Surviving family members include son Michael Curtis and wife Rebecca of Canton, GA, and daughters Terri Curtis Elliott of Plymouth, MA, and Lynn Curtis and husband Terry Portman of Lee’s Summit, MO. Grandchildren include Lauren Curtis Bowling, Lindsey Curtis and Samantha Portman Curtis. He also has four great-grandchildren and is survived by several cousins, nieces and nephews. A Catholic Mass in celebration of Dick’s life will be on Monday, July 27, 2020 at 10:30AM at St. Thomas Aquinas Church in Alpharetta, GA, with burial at 2:30PM at the Georgia National Cemetery in Canton with full military honors. The family suggests that in lieu of flowers, donations be made to Catholic Charities.

The family of Mr. Richard John Curtis created this Life Tributes page to make it easy to share your memories.

Send flowers to the Curtis family.