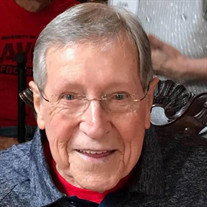 Richard Edmund Hellmann, age 93, of Milton passed away on December 30, 2020. He was born and raised in St. Louis, MO. He attended grade school and served as an altar boy at Our Lady of Perpetual Health, and graduated from Beaumont High School in St. Louis. He also served as an altar boy for the Holy Spirit Adoration Sisters, “The Pink Sisters,” and had huge respect for their work and often talked about their beautiful Convent. After high school, he received a degree in business from Milliken University in Decatur, Illinois and was a member of the Tau Kappa Epsilon (ΤΚΕ) fraternity. Richard served in the U.S. Army during WWII and served in Okinawa. He worked in the optical industry in various capacities during his career, where he was loved and respected by many. He married the love of his life, Barbara, and they devoted their life to lovingly raising their five children. He loved practical jokes and would go to great lengths to carry them out. He was known for his overuse of funny quotes…‘I didn’t feel a thing’, which started a tradition that is now carried on by his children, grandchildren and great grandchildren. He was fondly known to the grandkids as Poppy. All things cooking were his passion. He leaves behind his cookbook, cookware and barbeque collections as treasured reminders for the family. He was also a life-long Cardinals baseball fan. Preceded in death by his parents, Edmund F. Hellmann and Ruth Kramer Hellmann; sisters, Elaine Hellmann Tattersall and Joan Hellmann Spina; granddaughter, Olivia Nicole Hellmann. Survived by his wife, Barbara Hellmann; children, Laurie (Johnny) Craig, Jill (Ken) Bagley, Eddie Hellmann (Donna), Debbie (Sean) Parker and Rick Hellmann (Dianna); grandchildren, Leah Craig (Seth) Gamba, Joel Craig, Scott Bagley, Christopher Hellmann, Matthew Hellmann (Mary Beth), Callum Parker, Zak Parker, Alex Hellmann and Abigail Hellmann; great grandchildren, Carl Gamba, Thomas Gamba and Daniel Gamba. A private family service will be held at Northside Chapel Funeral Directors in Roswell. A private military ceremony will be held at Georgia National Cemetery in Canton. In lieu of flowers, the family requests that donations be made to Holy Spirit Adoration Sisters, “The Pink Sisters,” Mount Grace Convent, 1438 East Warne Ave., St. Louis, Missouri 63107.

Richard Edmund Hellmann, age 93, of Milton passed away on December 30, 2020. He was born and raised in St. Louis, MO. He attended grade school and served as an altar boy at Our Lady of Perpetual Health, and graduated from Beaumont High School... View Obituary & Service Information

The family of Mr. Richard Edmund Hellmann created this Life Tributes page to make it easy to share your memories.

Richard Edmund Hellmann, age 93, of Milton passed away on December...

Send flowers to the Hellmann family.