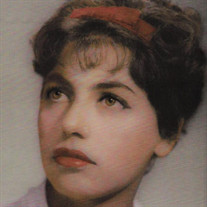 Rita Veronica Leanza was born in Brooklyn, New York on May 2, 1936, to her parents, Charles Leanza, and Lena (Bavuso) Leanza. She passed away April 2, 2022, just shy a month of her 86th birthdate. She was Sister to Vito Charles Leanza (deceased) and Aunt to Charles Victor Leanza, Jeanann (Missi) (Leanza) Melton, husband Dale Melton and Veronica Lena (Leanza) Williams, husband Jeffrey Williams as well as Great Aunt to Savannah and McKinnon Williams and Tyler Scoggins. Sister-in-law to Ann Leanza. Although she was an Aunt, her nieces and nephew embraced her more like a “Second” mother, referring to her as their Hero. From the time her immediate nieces and nephew were born, she loved and treated them like her own children. She was always ever present in their lives to influence and assist them in achieving their best life. She doted over her great nieces and nephew like they were her grandchildren. She loved giving each one of them kisses (baci baci). She instilled love of family and traditions to be carried on. She made a wonderful life for herself! She knew from a young age that she wanted to be a teacher and she made it happen. She spent most of her teaching career in Brooklyn at PS 179 (approx. 28 yrs.) and then became Assistant Principal at PS 170 after earning her Masters. She retired in December of 1995. One of life’s special moments to her was when she attended the 100-year anniversary of the school. To her surprise, students got up and affirmed to her what a special teacher she was to them. Soon after, there was a luncheon held in a restaurant in Brooklyn attended by approx. 25 students in her honor only. She was so touched by these occasions, she talked endlessly about them. To this day, countless numbers of her students revere her as one of their most favorite teachers they ever had. Some speak about her and the impact she made on their lives, crediting her with why and how they chose their careers in life. They also mention they too have a love of Opera music because Ms. Leanza played it in the classroom all the time. She travelled the whole world over visiting such places as Russia, Japan, England, Ireland, Germany, France, Egypt, countless trips to Italy, Canada, Alaska, cross-country in the U.S.A. and Cruises in Europe many times. Her most cherished place she visited however was Israel because she got to walk where Jesus walked. She raved about that trip for many years but also repeatedly talked of her trip to Italy travelling to see the preserved body of Saint Rita in the Italian Province of Perugia, which is north of Rome. She made these trips with family and lifelong special friends. She had some of the most devoted friends a person could ever have. Lastly, regarding travel, she planned in much detail a Leanza family trip to Italy and Sicily, not once but twice. 32 people accompanied her. She lost her voice being an interpreter to many, but she didn’t mind. Third to her love of family and travelling was her love of Opera music. She had such a passion for it! She was an annual member of The Metropolitan Opera in Manhattan. She got to meet her favorite opera singer Jose Carreras. He surprised her with her favorite flower, a bouquet of Red Roses. She attended quarterly her Mario Lanza Opera Luncheons that featured in person Opera Singers. She was a true New Yorker through and through. Many can attest to this fact for many reasons. She drove like a NY City Cab Driver and knew her way around Manhattan like the back of her hand. She attended Broadway plays like many of us attend movies. She always knew the best places to go and loved to show family and friends around when they visited. She was fierce and force to be reckoned with because of the FIGHT in her. She loved all her family, including extended family, and friends with such profound loyalty and affection. She was a great storyteller about her life in general. She loved to talk about family history and told many stories about it. She thought of her students as all her children. She was an Ovarian Cancer survivor and would have completed 5 years of remission October 2022. She was one of the most generous people you could ever meet! She has left an indelible impression in many minds that will never be forgotten. “Our Hearts of broken now but our memories of her will make us smile again!”

Rita Veronica Leanza was born in Brooklyn, New York on May 2, 1936, to her parents, Charles Leanza, and Lena (Bavuso) Leanza. She passed away April 2, 2022, just shy a month of her 86th birthdate. She was Sister to Vito Charles Leanza (deceased)... View Obituary & Service Information

The family of Ms. Rita Veronica Leanza created this Life Tributes page to make it easy to share your memories.

Rita Veronica Leanza was born in Brooklyn, New York on May 2,...

Send flowers to the Leanza family.