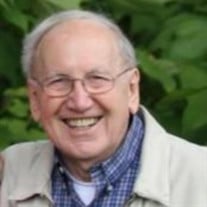 Robert “Bob” Taylor Scott, 93, of Alpharetta, Georgia passed away on March 27, 2021 after a short illness. He was born on January 27, 1928 in Birmingham, Alabama to William Taylor Scott and Zana Newman Scott. Bob graduated from Jones Valley High School in 1944 and was the class valedictorian. He served in the Army from 1945 to 1948 and was stationed in Tokyo, Japan at the end of WWII. After his tour in the Army, he worked for an office machine company in Chattanooga from 1948 to 1952 repairing manual typewriters and adding machines. Bob married Mabel Leona Barnette, of Centerville, Alabama in 1952 in Birmingham, Alabama. While raising a young family and pursuing a new career with Allstate Insurance Company in 1953, Bob attended and graduated from the Birmingham School of Law in 1960. He retired from Allstate in 1985. Over his career with Allstate, they lived in Birmingham, Alabama; Roswell, Georgia; Matthews, North Carolina; and St. Petersburg, Florida. After his retirement from Allstate, Bob and Mabel settled in Alpharetta, Georgia where they built their retirement home. They returned to their church home at Roswell First Baptist Church where Mr. Scott served as a deacon and where he and Mabel were long-time members of the Faithful Friends Sunday School class where they have many close friends. In 2018, they moved to Atria Senior Living at North Point, where they made many new friends. Bob is survived by his wife of 69 years Mabel Scott, the love of his life, and his three children of whom he was so proud: Deborah S. Gaunt (Larry), Gary Taylor Scott (Terry), and Robin R. Visceglia (Mark). He is also survived by two grandchildren, Amanda Scott Grindle (Ben) and Melanie Taylor Lawson (Kyle), and his three great grandchildren, Adalee Mae Grindle, Annabelle Rose Grindle, and Taylor John Lawson. A private family service will be held for Mr. Scott at the Georgia National Cemetery in Canton, Georgia on Wednesday, March 31, 2021. The family requests no flowers but asks that memorials be made to Roswell First Baptist Church, 710 Mimosa Blvd, Roswell, Georgia, 30075. Northside Chapel Funeral Directors of Roswell, Georgia is in charge of the arrangements.

Robert &#8220;Bob&#8221; Taylor Scott, 93, of Alpharetta, Georgia passed away on March 27, 2021 after a short illness. He was born on January 27, 1928 in Birmingham, Alabama to William Taylor Scott and Zana Newman Scott. Bob graduated from... View Obituary & Service Information

The family of Mr. Robert "Bob" Taylor Scott created this Life Tributes page to make it easy to share your memories.

Send flowers to the Scott family.