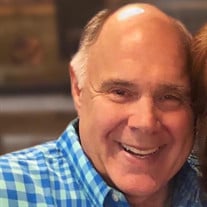 Robert Stuart Murray, 73, of Milton, GA, affectionately known to his friends and family as “Stu,” went Home to be with Jesus on February 27, 2022, while surrounded by his wife and children. Stu had never met a stranger and found great joy pouring into other’s lives and boldly sharing his faith. Stuart played football and graduated high school from Northside High School in Atlanta, GA. He went on to play football at Georgia Institute of Technology. He then earned 2 Master’s degrees from Georgia State University and 2 Ph.D.’s from the University of Georgia. Stuart completed his Post-Doctoral Work at Harvard University. He served in Young Life Ministries as a leader in college and on several of their boards throughout his life. Stu and his family have been active members at North Point Community Church since 1998. Stuart began his career as a Professor of Management at both Colorado State University and University of Tulsa, which lead into his future career as an Organizational Development/Change Management Consultant at many companies and organizations, having worked on all 7 continents at some point, mostly in the energy sector. Stuart ended his full-time career doing a turnaround and serving as interim CEO of Angelica Corporation. In semi-retirement and until his passing Stuart served on the Energy Advisory Board at Trilantic Capital Partners and various energy company boards, and charitable organizations. He was preceded in death by his father, Julius A. Murray, his mother, Ruth Murray, his sister, Julia Murray, and his nephew, Todd Joiner. He is survived by his wife of over 35 years, Laura Leilani Murray; his son Nicholas Ryan Murray; (wife Mariela; sons Aiden, Judah, Mateo) his daughter, Allyson Leilani Murray (fiancé Josh Stephens; son Noah); his daughter, Aimee Grace Murray; his brother-in-law, Rusty Joiner (sons Allan, Brad, Brian), and countless friends from places near and far. Although we celebrate his life, legacy, and homecoming with Jesus, his family and friends will miss him deeply. Visitation will be held on 3/7/2022 from 1-3 PM ET at Northside Chapel Funeral Home; 12050 Crabapple Rd, Roswell, GA, 30075. Visitation will be immediately followed by a graveside service and burial at 3:30 PM ET at Green Lawn Cemetery; 950 Mansell Rd, Roswell, GA, 30076 Stuart’s Celebration of Life Service will take place on 3/8/2022 at 2 PM at North Point Community Church; 4350 North Point Pkwy, Alpharetta, GA, 30022 In lieu of flowers, the Murray family kindly requests donations be made to either YoungLife Ministries or North Point Community Church.

Robert Stuart Murray, 73, of Milton, GA, affectionately known to his friends and family as &#8220;Stu,&#8221; went Home to be with Jesus on February 27, 2022, while surrounded by his wife and children. Stu had never met a stranger and found... View Obituary & Service Information

The family of Dr. Robert Stuart Murray created this Life Tributes page to make it easy to share your memories.

Send flowers to the Murray family.