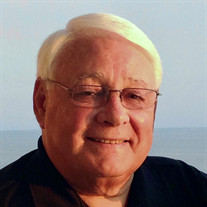 Rodney Marcus Kittrell of Roswell, Georgia, passed away peacefully in his home surrounded by his loving family on March 5, 2021. Rod was born on August 17, 1946 in Griffin, Georgia to the late Jessie and Helen Kittrell. Rod was a “military brat” moving many times as a youngster and graduated from Frankfurt American High School in Frankfurt, Germany where he excelled at football and baseball. He attended Lees-McRae Junior College where he met the love of his life and future wife Elsie. He completed his college education as a proud graduate of the University of Georgia earning a Bachelor of Business Administration degree. Rod was an avid Dawg fan and enjoyed nothing more than a Saturday “between the hedges” with 92,000 of his closest friends. As much as he loved Georgia football, his true passion was baseball. He was a devoted fan of the NY Yankees. He also followed golf, attending the Masters every spring and generously hosted many friends and family to enjoy it with him. His love of team sports and competitive drive made him an amazing coach and mentor both in business and sports. He coached baseball for many years and believed in being tough but fair; often quoted saying “there is no crying in baseball”. His influence was far reaching, and he believed in working hard, learning from your mistakes, and always striving to be better than you were yesterday. Rod enjoyed a very successful career in computer and software sales. He started his career as a salesman and was quickly promoted into various leadership positions where that competitive drive, strong mentorship, and ability to build successful teams were apparent. His work ethic and dedication to achieve were evident and why he continued working until he retired at 71 years of age as Vice President, North American Sales. His integrity, ethics and moral character never wavered and were the foundation of his success. He related to all walks of life and people of all ages and was loved by many. He was known for always having a good joke to tell and a boisterous laugh that will be sorely missed. With all his many achievements throughout life, he considered the greatest of these to be his family. They were the absolute pride and joy of his life and were treasured above all else. Rod was preceded in death by his parents, Jessie and Helen Kittrell and brother Randy Kittrell. He is survived by his devoted wife of 53 years, Elsie McGowan Kittrell, daughter Kim Ghant and husband Ernie of Asheville, North Carolina, daughter Kristin Rohland of Canton, Georgia and son Marc Kittrell and wife Morgan of Woodstock, Georgia, as well as his eight grandchildren, Wesley and Benjamin Ghant, Garrett, Kelsie and Kade Rohland and Piper, Tatum and Tripp Kittrell as well as many nieces and nephews. Due to the pandemic, a celebration honoring his life will be held later this summer and announced by Northside Chapel Funeral Directors and Crematory, 12050 Crabapple Rd. Roswell, Georgia 30075. In lieu of flowers, donations may be made to the Wounded Warrior Project (www.woundedwarriorproject.org) or Sacred Journey Hospice (www.sacredjourneyhospice.org).

Rodney Marcus Kittrell of Roswell, Georgia, passed away peacefully in his home surrounded by his loving family on March 5, 2021. Rod was born on August 17, 1946 in Griffin, Georgia to the late Jessie and Helen Kittrell. Rod was a &#8220;military... View Obituary & Service Information

The family of Mr. Rodney Marcus Kittrell created this Life Tributes page to make it easy to share your memories.

Send flowers to the Kittrell family.