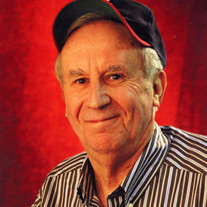 Ron was born in Chattanooga, Tennessee to Nelle Cain and Russell Henry Kemp in April 1941. He spent much of his childhood and teen years in his beloved Woodstock, Georgia when it was a small town and the people there were just simply home. Those precious memories of growing up in a rural small town became the subject of his many stories that entertained countless audiences and family dinners over the years. He married Linda Coleman in 1961 – the true love of his life. They danced, laughed, traveled the world, and loved one another for 59 years. Ron served in the United States Air Force from 1961 - 1968. Following his years of service, Ron and Linda moved back to her hometown of Roswell, Georgia where he lived for the remainder of his life. There he raised his family and was a self-employed business man for over 30 years. He was a man of strong faith and longtime member of Roswell United Methodist Church and the Seekers Sunday School Class. He was a much loved and respected member of the Roswell community as a little league assistant baseball and softball coach, assistant scout master for Boy Scout Troop 431 for over 25 years, an active member of the Georgia Appalachian Trail Club, and a highly regarded member of the Southern Order of Storytellers. He loved his family dearly, the great outdoors, most people, a great story, and good laugh. Ron left in some random writing, found on the day of his death, his own epitaph – “I did the best that I could.” … and he truly did. Survivors who will miss him include his wife Linda, son Russell (Helen) Kemp, daughter Rhonda (Chris) Webb, granddaughters Linda Anne (Harrison) Cornforth and Laura Kemp. He will also be greatly missed by his extended family and many friends. Due to the current situation with the Corona Virus, a private service for immediate family will be held on Friday, August 28th. In lieu of flowers, donations are suggested in Ron Kemp’s memory to Roswell United Methodist Church H.E.L.P. Fund or to the North Fulton Community Charities.

Ron was born in Chattanooga, Tennessee to Nelle Cain and Russell Henry Kemp in April 1941. He spent much of his childhood and teen years in his beloved Woodstock, Georgia when it was a small town and the people there were just simply home.... View Obituary & Service Information

The family of Mr. Ronald (Ron) Stephen Kemp created this Life Tributes page to make it easy to share your memories.

Ron was born in Chattanooga, Tennessee to Nelle Cain and Russell...

Send flowers to the Kemp family.