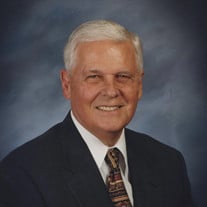 Samuel Vinton Campbell, Jr., age 86, and a resident of Johns Creek, Georgia, passed away on December 2, 2020, after an extended period of illness. He was born in Macon, Georgia, to Samuel Vinton Campbell, Sr. and Gladys Bourne Campbell. His parents later moved to Montgomery, Alabama, where Sam spent most of his early life, graduating from Sidney Lanier High School in 1952. He completed his military service in the Air National Guard. Sam graduated with a BS degree from Auburn University and was employed by AT&T for 35 years. He worked in various departments of AT&T, moving with his family a number of times around the southern states and also to the NJ/NY area. He traveled extensively during his assignments involving international relations, including Canada, Central and South America, Africa, Puerto Rico/Virgin Islands. He and the family settled in the Atlanta suburbs in 1983. Following retirement from AT&T, Sam worked as a consultant for Cathey, Hutton and Associates, a Texas telecommunications company. Sam is survived by his much loved family: his wife, Helen Reeves Campbell, his son Samuel Vinton Campbell, III (Trey) and daughter-in-law Cassandra Campbell, his son Scott Edward Campbell, and his two grandchildren, Samantha Campbell and Chase Campbell. Sam enjoyed community service immensely and was involved with a number of different organizations throughout his career. He assumed leadership roles in many of those, such as the Civil Air Patrol, Jaycees, Rotary Club, Toastmasters, Pioneers, United Way, Roswell Planning and Appeals Boards, Roswell Chamber of Commerce, State Representative Campaign, and both Willow Springs and Ammersee Lakes Homeowners Boards. Sam and Helen are longtime members of the Roswell United Methodist Church and active members of the Crosstalk SS Class. They were previously members of the Country Club of Roswell, where Sam enjoyed golf and tennis. He and Helen also loved to travel as much as possible after their retirements. Sam was known to all his friends as gentle, kind, and caring, with a great sense of humor. He will be missed by all who knew him! A celebration of life service will be held at a future date. If you wish to make a memorial donation, it may be given to St. Jude’s Research Hospital or to the charity of your choice

The family of Mr. Samuel V. Campbell Jr. created this Life Tributes page to make it easy to share your memories.

Send flowers to the Campbell family.