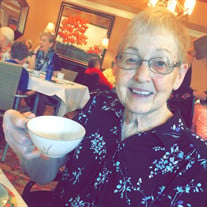 Sharon Reed Forde passed away peacefully on Saturday, July 31 in Alpharetta, Georgia. She was 84 years old. She is survived by her daughter and son-in-law, Lesley and Thomas Cogburn of Decatur, Ga., daughter and son-in-law, Lainey and Phillip Bradley of Cumming, Ga., son-in-law, Marty Smith of Greenville, NC, and six grandchildren: Hannah, Caitie, Ben, Will, Julia, and Manny. She is preceded in death by her parents, Charles and Goldie Reed; her brother, Roger Reed; and her daughter, Lindsey Forde-Smith. She earned a teaching degree from Western Michigan University and later moved to Gastonia, North Carolina, where she raised three daughters, instilling in them the values of faith, strength and love. After relocating to Georgia in 2001, she became known as “Grandma Sharon” to most: a beloved volunteer at Parkway Preschool in Cumming, a source of light and encouragement for everyone she encountered, and a mother and grandmother figure to many. She enjoyed using her love of sewing to welcome new babies. Her generosity and kindness were abundant. Sharon resolutely battled rheumatoid arthritis for over 30 years, and never let it stop her from giving of herself to others. She enjoyed the last seven years of life in her assisted living community, where she served as a Resident Ambassador and had many friends. She was an avid, lifelong reader and will be remembered for sending notecards to others with her trademark smiley-face. What brought her the most joy was spending time with family. A memorial service will be held privately, with a graveside service to follow at Gaston Memorial Park in Gastonia. Memorials can be made to two causes important to Sharon’s children and grandchildren: Browns Bridge Church’s Be Rich 2021 Fund (Send to North Point Ministries, 4400 North Point Pkwy., Suite 100, Alpharetta, GA 30022; checks made payable to “BBC Be Rich” with “In Memory of Sharon Forde” in the memo line) or Georgia For Georgia (georgiaforgeorgia.org/donate; select “Dedicated in Memory” of Sharon Forde.) Another way to honor our beloved mom and grandma is to send a note of encouragement to someone you love.

The family of Ms. Sharon Reed Forde created this Life Tributes page to make it easy to share your memories.

Send flowers to the Forde family.