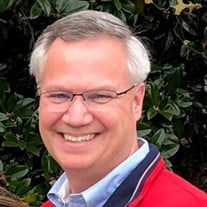 A longtime resident of Alpharetta, GA died suddenly on Sunday, August 8th. He was 55. Tom is the beloved husband of Jeanne Lynch McGinty to whom he was married for almost 29 wonderful years of parenting, travel, entertaining and spending special times with family and friends. He is the son of John J. McGinty and Kathryn L. McGinty and the late Victoria P. McGinty. Born April 30,1966 in Dearborn, MI, Tom spent his youth growing up in Coral Gables, FL, Rochester, NY, and Greenwich, CT. upon graduating from Greenwich High, Tom took a PG year at Lawrenceville Prep where he met and 8 years later married his wife, Jeanne. Tom graduated college from University of Rochester in 1989 and went on to obtain his MBA from Farleigh Dickinson University in 1992. Tom worked at AT&T for almost two decades, starting in Sales and soon moving to Marketing. In 2005, Tom was on the team that re-launched the prepaid wireless business under the GoPhone brand and was instrumental to growing that part of the wireless business for over 10 years. Most recently, Tom was the lead industry analyst in the wireless marketing group, where forecasts and analyses drove many decisions and lively discussions among the leadership team. However, Tom McGinty’s greatest work accomplishment will always be the many friendships he made and maintained throughout his career. Tom leaves a beautiful legacy with his treasured children, Margaret K. McGinty, Sean L. McGinty and Maeve V. McGinty. They are, as anyone who knows him knows, the greatest source of pride and pure joy to him. He is survived by 6 siblings, 8 brother/sister in-laws as well as being “Uncle Tom” to 21 beautiful nieces and nephews. Tom cherished time spent with his very large extended family! There will be a private visitation for family at Northside Chapel, in Roswell, GA prior to the Funeral. The Funeral Mass will be open to the public on Monday August 16th at St. Thomas Aquinas Catholic Church, Alpharetta, GA at 10 am. A Celebration of Life Reception will be held at Rena’s Italian Fishery and Grill in downtown Alpharetta, GA. In keeping with Tom’s inherent ability to make everyone he encounters comfortable and at ease, no suits, no ties, no formal attire necessary to participate in this final send off! In lieu of flowers, please consider placing a donation to a charity or cause of your choice in Tom’s name.

A longtime resident of Alpharetta, GA died suddenly on Sunday, August 8th. He was 55. Tom is the beloved husband of Jeanne Lynch McGinty to whom he was married for almost 29 wonderful years of parenting, travel, entertaining and spending special... View Obituary & Service Information

The family of Mr. Thomas McGinty created this Life Tributes page to make it easy to share your memories.

A longtime resident of Alpharetta, GA died suddenly on Sunday,...

Send flowers to the McGinty family.