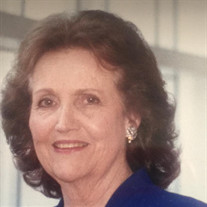 Virginia Covert Ricks of Alpharetta, GA passed away on the 2nd of April 2021 at the age of 92, leaving behind many friends and family members who loved her dearly. She was born on the 27th of March, 1929, to Frank A. Covert and Jennie Bell Reynolds Covert in Miami, FL. She was the eldest of four children and only girl, so she got her feisty independence from keeping up with her active younger brothers, Frank “Bud” A. Covert Jr., Charles E. Covert and James Robert “Bob” Covert. Virginia married the love of her life Stafford “Sam” Ricks on the 19th of November 1947 in Miami, FL. Together they enjoyed a wonderful life in Miami, FL with their two children, Robert Steven Ricks and Cathy Ray Ricks for 40 years. Virginia enjoyed traveling, gardening, knitting, sewing, reading, cooking and spending her days surrounded by family. Virginia worked for the City of Miami and for General Development Corporation, which was the largest land development company in Florida, as an Accounts Receivable Supervisor. But her greatest achievement and most proud accomplishment was the rearing of her children. Virginia was a go-getter and always on the move. Her time was always invested in some project where she could be found crafting and creating costumes, toys, clothes and food for the latest festivity, or the wants and desires of her kids or grandkids. She loved to get all dolled up and appreciated all things sparkly and beautiful. She was a fearless firecracker that could whip up delicious meals in minutes and sew any imaginable stitch until it became a masterpiece of art. Upon retiring, Virginia and Sam moved to Alpharetta, GA to be closer to their two children (Steve and Cathy) and five grandchildren (Brad, Krista, Keri, Kelly, Ashley). Virginia cared for her grandchildren after school and always hosted family Sunday dinners where home-cooked southern meals were a staple and children running around were the norm. When she wasn’t caring for her grandchildren, she could be found managing one of her son’s stores called My Storyhouse Toys which she did for 5 years. She was not only the family matriarch but the driving force behind all the dreams her family set out to make come true. She loved nothing more than to spoil all children and make them smile. She leaves behind two brothers, Bud Covert, and Bob Covert (Kendra) , two children, Steve Ricks, (Marilyn) and Cathy Smith (Ron), five grandchildren, Brad Wright ( Margaret), Keri Ivey (Ryan), Krista Ricks, Kelly Roberts (Damien), Ashley Young (Brent) and 6 Great Grandchildren, Anderson & Coleman Ivey, Harrison Wright, Caroline Ricks, Sailor & Summer Young. And many Nieces and Nephews. She is preceded in death by her husband Stafford (Sam) Ricks, her parents, Frank and Jennie Covert, and her brother Charles Covert, and Nephew Gary Covert. Virginia will be cremated and placed next to her husband Sam at the Georgia National Cemetery in Canton, GA. Memorials in her name may be made to St. Judes Hospital, Memphis Tenn.

Virginia Covert Ricks of Alpharetta, GA passed away on the 2nd of April 2021 at the age of 92, leaving behind many friends and family members who loved her dearly. She was born on the 27th of March, 1929, to Frank A. Covert and Jennie Bell... View Obituary & Service Information

The family of Mrs. Virginia Covert Ricks created this Life Tributes page to make it easy to share your memories.

Virginia Covert Ricks of Alpharetta, GA passed away on the 2nd...

Send flowers to the Ricks family.