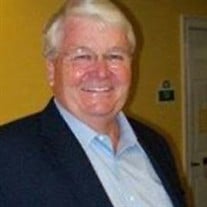 Dr Walter “Walt” Stewart went to be with the Lord on 7/17/2020 in the company of his wife Sandra at their home in Roswell Georgia. He was the only child of Everett and Eva Ree Stewart of Good Hope, Georgia. He is survived by his wife of 55 years Sandra Moreland Stewart. They met in pharmacy school at the University of Georgia before he attended Emory School of Dentistry. Walter was a life member of many dental associations including the ADA, NDDS, Hinman Dental Society, Pierre Fauchard Academy, and International College of Dentists. He practiced dentistry in the Sandy Springs Community from 1969 until his illness in 2015 made him put his hand piece down. In addition to Sandra, he is survived by his daughter Heather Hingson and husband Michael of Dunwoody GA; his son Scot Stewart and wife Cathy of Gainesville GA; his son Seth Stewart and wife Katie of Atlanta GA. He leaves 7 grandchildren: Emily Hingson, Joe Hingson, Sam Stewart, Henry Stewart, Maggie Stewart, Libby Stewart, and Hamilton Stewart. They all affectionately called him Bubbie. Walt left peacefully but it took Parkinson’s, A-fib, a Seizure disorder, and subdural hematoma to make him go. He loved and lived for the family he raised and as such found his greatest joy watching his children and grandchildren compete in athletics, perform on stage, and work off their transgressions in his dental office or at his cattle farm. He had a limp his whole life due to a childhood illness but somehow managed to walk out of a cotton field in Walton County Georgia to become a pharmacist and then a dentist. He was as stubborn as the mules he tended to as a boy and anyone who bet he could not do something soon lost what they wagered (except for that time at the Grand Canyon). He was a gifted conversationalist and he fixed the broken hearts of his lifelong patients, along with their smiles, with his patient style and listening ear. We will miss his infectious grin, his unmatched ability with curse words and the way he danced even when confined to a wheelchair. In his honor we all “do the Bubbie” and shed a tear at his passing. In his final years, Walter joined “Aloha to Aging” which serves folks with similar brain injuries to his. In lieu of flowers, please make donations in his memory to: Aloha to Aging, Inc. 1612 Morningside Trace, Marietta, GA 30062 or https://alohatoaging.org/ways-of-giving/

Dr Walter &#8220;Walt&#8221; Stewart went to be with the Lord on 7/17/2020 in the company of his wife Sandra at their home in Roswell Georgia. He was the only child of Everett and Eva Ree Stewart of Good Hope, Georgia. He is survived by his... View Obituary & Service Information

The family of Dr. Walter E. Stewart Jr. created this Life Tributes page to make it easy to share your memories.